When you’re done with the harbour, beaches and Opera House, drag your tired, tourist ass over to see the murals in Newtown.

My home used to be Chorlton, Manchester (in the UK). Now home is Newtown, Sydney (in Australia). Culturally they are similar suburbs. Colourful, eccentric, tolerant, diverse, hip, politically involved, bohemian. Birkenstocks are prevalent. Not quite separated at birth.  But pretty close.

I’m connected to both places by an invisible length of twine. I have on occasion, made a slip of the tongue. Calling Newtown Chorlton. And vice versa.

Once considered a bit dodgy, both are now on the inevitable path to gentrification. Years ago, during my first weekend living in Chorlton, the main shopping area was evacuated by the Police. A grenade had been found in a local pub. Things have poshed up a bit up since then.

A point of difference is public art. Chorlton has (or had… things may have changed) none. Newtown has public art aplenty. Everywhere, artists showcase their talent. On a big scale. Garden walls. sides of houses. Even shop facades. You can’t move for murals here and it’s bloody fantastic. You should come explore this extraordinary area.

Visiting Sydney from overseas? When you’re done with the harbour, beaches and Opera House, drag your tired, tourist ass over to Newtown. See a side of Sydney city that will surprise you. Entertain you. Maybe even shock you a bit. At the very least you see the abundant public art.

In no particular order, these are the 5 top murals in Newtown. Do you agree? Which mural(s) is your personal favourite? 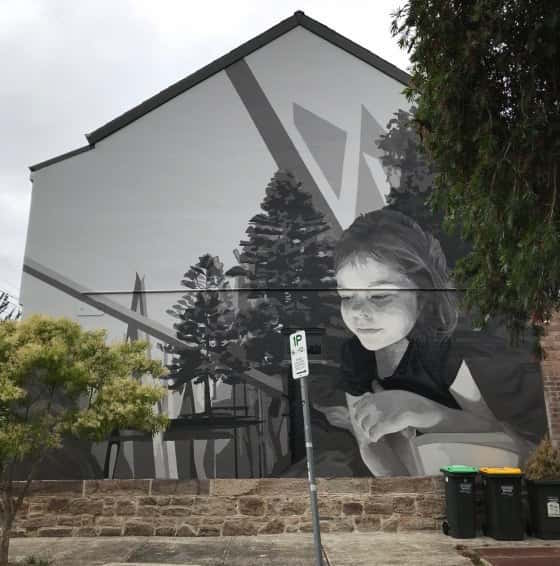 A huge monochrome mural. Relatively new addition to the Newtown streetscape. Find it at the dogleg on Margaret Street. A child (‘Mary’) peers down from the side of a house. A curious giant.

Admittedly this is Enmore rather than Newtown… but let’s not be pedantic. It’s almost Newtown.  Underappreciated because of location,  it’s probably the longest mural in the area. Mexican Day of the Dead is what’s going on here. A Sombrero’d skeleton serenades a senorita. Her long, braided hair blowing behind her in the breeze.

This mural was completed in April 2014, the weekend I moved into my house on Alice Street. A desert boot wearing dude releases birds from his birdcage torso. I love this mural but the deeper meaning escapes me. There’s a pleasing aesthetic.  The mural fits perfectly into its location on the side of this old milk bar. Between the windows and shopfront.

Move along up Alice to Matt Hogan Reserve to find another, considerably bigger, mural by Fintan Magee. A cross-legged, relaxing-looking, young dude watches his home burn? A metaphor is at play here. What is it? 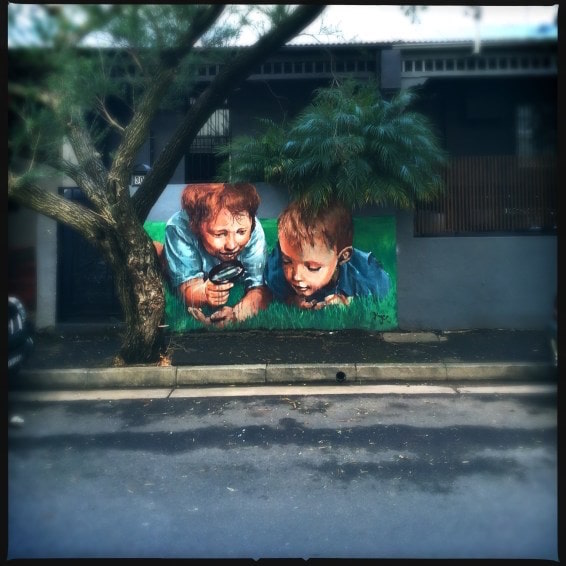 A personal favourite. The best mural in Newtown? A warm, craft-beer-glow about you as you leave Young Henrys Brewery, you’ll see this beauty on the right.  On Wilford Street. 2 young boys explore the world with a magnifying glass. The innocent, intense curiosity is moving. These kids could step out of the mural to continue their nature exploration.

There you have it. Does my choice of the top 5 murals in Newtown offend you? Violently disagree? Have your say in the comments below.

View all posts by Pete Mercer